Statistics show that in recent times, the level of poverty in Bangladesh has dropped. Yet, almost 1 in 4 Bangladeshis are STILL living in EXTREME poverty, demonstrating the historical and current magnitude of the problem.

Bangladesh is one of the most densely populated nations in the world with high levels of food poverty. With 32% of the land consisting of coastal plains, the smallest fluctuation in rainfall can destroy the delicate ecosystems and increase salt levels in both land and water.

This means livelihoods can literally be washed away in an instant. Over half of the families living in these areas experience food shortages for up to six months a year as damaged land drastically reduces crop yields. It is children who then pay the price of the destruction as they become vulnerable to child labour and trafficking, whilst communities also risk contracting water-borne diseases.

Regarding healthcare, 58% of physicians work within the private sector in Bangladesh, meaning that those living in poverty can’t afford to access over half of the medical staff in the country.  Furthermore, healthcare professionals are concentrated in urban cities, despite 70% of the population living in rural areas, thus the healthcare system is even more inaccessible in rural Bangladesh. 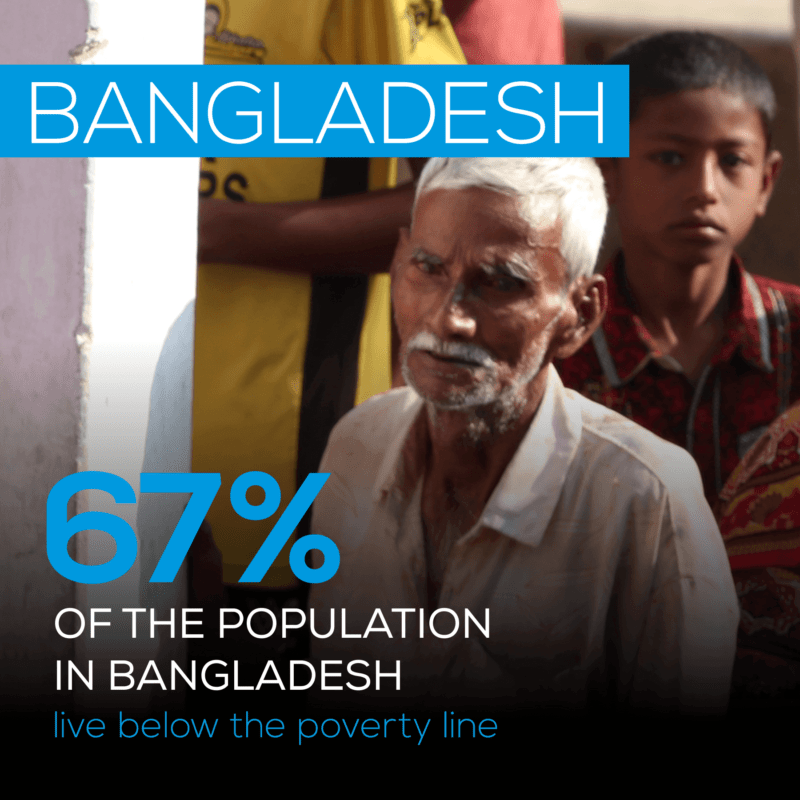 Between 2010 and 2016, poverty fell significantly in the country, specifically in rural areas where it dropped down to to 26.4%, Alhamdulillah! Urban poverty had decreased by over 2% as well; but on the other hand, almost 1 in 4 Bangladeshis are still living in extreme poverty.

Between 2010 and 2016, poverty fell significantly in the country, specifically in rural areas where it dropped down to to 26.4%, Alhamdulillah! Urban poverty had decreased by over 2% as well; but on the other hand, almost 1 in 4 Bangladeshis are still living in extreme poverty.

Global Relief Trust have been working in Bangladesh for several years and we have steadily increased our impact, thanks to a multi sector level approach to combatting poverty. We are working hard to mitigate the effects of climate change by providing water systems that are dug deeper and providing support to farmers.

We have been providing long term shelters for the homeless, orphanages that enable children to excel and training and employment opportunities for women. We are proud of our small successes, but with so much more to be done, we hope you can help us create a real and lasting change.